Years ago, the thought of preparing a meal for a man was a joke. I’m no feminist, but the idea that a woman should conform to gender stereotypes was hilarious to me. Until now.

It’s not to say that I believe it is my duty to feed my man, but the joy it gives me seeing him scarf down a plate of my home cooking is enough to get me to do it again and again. And it’s not terribly inconvenient to be able to rely on him for manual labor. Knowing this, my S.S. likes to resort to his Midwestern roots and convince me that a woman’s place is in the home, and a man is responsible for, well, just take a look (keep in mind that this is mostly a joke. Mostly): 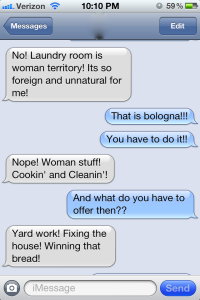 (And my response? “Ah. Well at least it’s documented.”)

While I have no problem cooking, and even committing to mild household chores, I still don’t see the point of making the bed, and I don’t do laundry.